What have birds and Maude the Cow got in common?

They both Twitter! No really, how successful this has been I do not know. Maude is the Anchor Butter mascot, and has been twittering for a while.

The function is purely brand awareness despite the fact that the tweets rarely mentions the brand it is a way of gaining attention and delivering audiences to the brand homepage. The outcome, they hope, is that next time one of the 1,329 followers, or perhaps friends made aware of the twittering cow, are at the spreads aisle of the supermarket Anchor is front of mind and that purchase maybe even helping that cow survive. The trick is to have the attractive anthropomorphic mascot to front the campaign - think Alexander Orlov who likes comparing his fellow Meerkats - perhaps Tory Bear can do the same in a political context.
Posted by Dr Darren G Lilleker at 4:55 pm 9 comments:

It is unknown what impact the blogosphere has. There is some academic discussion of it acting as an echo chamber for ideas; basically that the messages of a brand, politician, political party or journalist become repeated and circulated across weblogs. Thus it can amplify messages or, by amplifying the messages of one party, it can reduce the impact of opponents. While there are active Labour and Liberal Democrat bloggers, it is the Conservatives that have the most organised, most followed and most sophisticated support in the blogosphere. Iain Dale and Guido Fawkes have become pseudo political celebrities as well as reasonably respected commentators (more the former than the latter) and there are a number of others such as Dizzy and Tory Bear with a significant readership. These may well be significant players among those who follow online debates. Guido mainly now seems to attack Labour at every opportunity, this critique of a party election broadcast is a particularly good swipe at the Labour spin machine
I have only seen one Labour blogger doing the same, Recess Monkey (whose amusing response to the video, if not to the criticisms made, is below) in fact left wing bloggers seem to also take a critical stance a lot of the time. 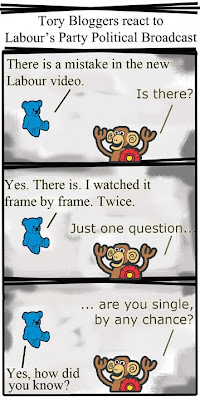 So the Conservatives have a lot of cheerleaders online while Labour, it seems, are failing to make any breakthrough in this respect. This may be symptomatic of the party's standing; it may be a failure to mobilise supportive bloggers, it may be that this simply not done in Labour circles. If there is an impact, and cheerleaders are important in amplifying messages and getting messages across to new audiences then Labour seem to be seriously lacking here.
Posted by Dr Darren G Lilleker at 10:25 am 3 comments:

The power of the viral 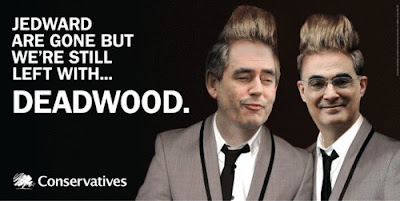 Of course this is just the start of the deluge of photo shopped pictures that are going to be circulated by parties and their supporters over the next six months prior to an election so the joke will wear thin after a while; but as a one-off it may well get coverage across the Internet. And of course this is its only function, getting seen, understood and retained as a message; anything that derides Labour is doing the Conservatives a favour!
Posted by Dr Darren G Lilleker at 12:18 pm 1 comment:

If your first thought is 'Huh' bear with me. I was at an interesting research seminar yesterday run here at Bournemouth by colleague Joe Flintham who was talking of the notion of a collaborative diegesis. Diegesis may sound a complex thing but it is something we are all familiar with, it is the world which is created by any narrative, that which involves us and we are transported to when we read a book, watch a film etc. For Joe, his work is on fiction and collaboration in stories using a range of media (see Hauntology for one of his experimental projects which invited people to add sounds while exploring a 'haunted' table with drawers). I was struck by the idea of a collaborative narrative which builds and develops a story and was thinking of its application beyond the world of fiction. 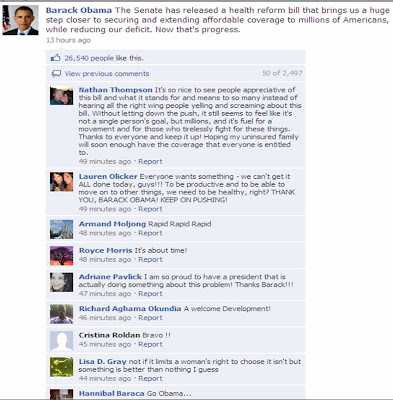 Here was my thought. Social Networking Sites are naturally collaborative, a profile page on Facebook, YouTube etc can be populated by the creator but also by visitors to that profile. Each contributing comment on a post, picture or video adds to the original item and so provides a further dimension that can be experienced by future visitors. Political profiles, be they fan pages, individual MP's pages or party video sites usually allow comments. The similarity with contributions to something like Hauntology is striking. Some are reflective on the original item; some tangential and related to the host, production values, spelling, whatever; some relate to the meta-narrative (big picture) such as a campaign or contest, values or a world view; they are each personal and had meaning at the time of their posting. Of course there is censorship of the contributions, and perhaps this results in a wholly supportive narrative, this is a necessary feature of oppositional politics. However is something like the contributions to the Post shown on the right, something which seems almost a unique feature of Obama's campaign and presidency in terms of the numbers contributing if nothing else, a collaborative diegesis? Is this creating a world constructed by a collaborative narrative which is enveloping Obama as the character at the centre? Is this narrative not only persuasive, in terms of the endorsements of Obama by the members of the Facebook community, but also transportational; does it conjure the image of a world in which Obama has a free hand, or the world he wants to create, and so why he should be supported. It was an idea inspired by Joe's talk and so all feedback and comments welcome.
Posted by Dr Darren G Lilleker at 4:53 pm 7 comments:

There is perhaps nothing more persuasive than a message than comes from someone you feel to be similar to yourself. We are persuaded most often by our friends and loved ones, they have a profound impact upon our attitudes and behaviour on a daily basis; most of the time we are unaware of that impact. Many campaigns attempt to replicate the power of what, I guess, can be called peer pressure. The Conservative party wall of videos, the fan pages on Facebook, all attempt to get the public to endorse a party on the basis that people like them are already doing so.

Barack Obama is doing the same with the issue of Health Care Reform. The campaign ran a competition to make a video that would promote the campaign. The YouTube site claims there have been "nearly 1,000 submissions, 20 amazing finalists, and more than 3 million views" for the call. The have selected a winner: Eric Hurt (the video is below)
The winning video is very simple in its message. It links well to the theme of Organising for Amwerica by offering short future narratives from children on what would happen if they have an accident and need medical care. It is a message to get people to donate to the campaign, to lobby on behalf of the campaign, and so to put pressure on elected representatives to pass the reform bill. The power of this is the people who are backing the campaign, this one video has received 70,404 views and received 135 comments since it was posted eight hours ago; scanning the comments they are all positive about the campaign. The tactics of soliciting people's input and posting on a social network allows the supporting citizens to co-produce the campaign messages and make the camapign belong as much to the people as to Obama. Whether they represent a majority or not it gives the impression of a movement; whether there are any lessons that can be drawn from this and applied elsewhere is difficult to say. Obama has a unique approach to being President, if he wins this campaign he may well be seen to be the ultimate advocate of people power; if not he may be able to shrug this off as a brave attempt to back the people that was thwarted by vested interests on Capitol Hill. It seems that co-production is not just persuasive, but also offers a win-win zone for Obama and the people of the US.
Posted by Dr Darren G Lilleker at 9:05 am No comments:

Widgets have become quite important in online campaigning. Widgets are simple little devices that allow brands to be promoted across their supporters web sites and various online presences. The problem with this strategy is motivating supporters, or in fact any web user, to want to place that widget on their site.

The Conservatives may have found a solution. The General Election Countdown (right) is part of a wider campaign, spearheaded by party chairman and de facto (if not in reality) face of their campaigns, Eric Pickles. He wants to ensure that members and supporters keep focus on the election and do not see it as a foregone conclusion whatever public opinion suggests. He is an interesting choice, his down-to-earth and amiable manner, greeting viewers of the latest video with 'Hello Chums' gives the impression of an ordinary guy; the serious message of the mountain the party have to climb to win delivered in a serious but friendly manner encouraging supporters to work for the party. The widget allows you to countdown to the election while also promoting the party slogan 'Now for Change'. The countdown itself is quite cool, well perhaps it is to political nerds like me anyway, time for Labour to find their own widget for supporters.
Posted by Dr Darren G Lilleker at 8:21 pm 1 comment: 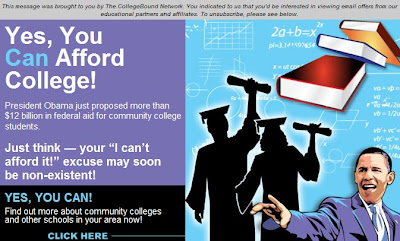 Odd to see a politician being used in an advertisement as a positive endorser of a message. It seems the power of the 'Yes We Can' slogan, its symbolic meaning, coupled with Obama's reforms is striking a chord in the US and so is being used to back social messages. No idea why this was emailled to me but thought it was interesting enough to share.

Why winning Glasgow North East was important but meaningless 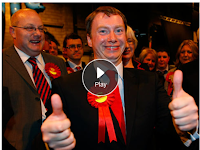 Labour's first good news story for a very long time is their victory in Glasgow North East. While the figures show an increased majority up to 60% and what could be described as a landslide endorsement of Brown's government, such indications may be erroneous. By-elections are strange beasts. It would be nice to see a resurgent Labour party, whatever your political persuasion it is a good thing for democracy. But this is not the indicator of this happening. Turnout was only 33%, Labour's majority was always high (though previously unopposed by the major parties) and their overall number of votes decreased slightly. The Scottish National Party gained around 1,000 votes the other parties made little headway at all. But consider the resources thrown at the contest. The visits made the Labour supporters in this traditional heartland seat feel important. If only opening a local or national newspaper they found their area centre stage with the prime minister (or similar figure) walking their streets. This will not happen at the General Election. The General Election will be decided in those marginal constituencies, here resources will be deployed to their maximum but those voters may be much harder to persuade to vote (or support Labour) than the hardened Labourites of Glasgow. Unfortunately for many local MPs and PPCs, it is the question of who should, or who should not, be prime minister that will dominate the contest. In Glasgow it was a question of do they still believe in Labour, they did, but the election will ask a very different question of a range of very different voters. Thus this is a momentary blip in Labour's fortunes, they need a much more positive note to be sounded at the national level to find a resurgence in time for 2010.
Posted by Dr Darren G Lilleker at 4:18 pm No comments: