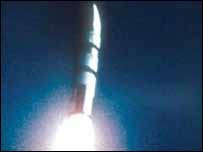 I commented in 1998, at the time of New Labour's Strategic Defence Review that, rather than considering decommissioning of our nuclear deterrent, the report simply made any alternative to continuing to have some form of nuclear defence appear too expensive. While the growing threats from non-state actors was recognised, it was deemed too risky to abandon the UK's nuclear capability. Such ideas are reiterated 8 years later. Blair called it unwise and dangerous to not have the weapons, on the basis that 'rogue states' who also possess nuclear weapons may also 'sponsor terrorism'.
This reminds me of a wonderful exchange between fictional PM Jim Hacker and his Head of the Civil Service Humphrey Appleby from the wonderful comedy Yes Prime Minister. The conversation first enquired when the button would be pushed, 'When Soviet troops on manoeuvres in East German got lost in the fog and ventured over the border', no, no, no, of course not. 'When a Soviet submarine enters the Thames', er, no, well, I don't know. "So when Prime Minister", Appleby demands; prevarication continues. The upshot of the conversation is that the UK government knows they would never use them, the Soviet government knows the UK will never use them, the only people who believe they are a form of protection is the UK public. Perhaps again the rhetoric suggests that something is being done to prevent terrorism.
While it would be amusing to rewrite the exchange to include Tony Blair, 'so you suspect Pakistan of not acting as forcefully as it could against Al Queda; the button Prime Minister?', perhaps this misses the point. That while the deterrent may be a symbolic message that defence is being taken seriously, it has greater symbolic value in the post Cold War world.
What is this value, it is a badge of honour. In having nuclear weapons it places this small nation among the elite. It means that there is a seat at the top table when world leaders meet, the voice is slightly louder among the rest, the perception of power increases. Yet here also is the danger. If there was a visible state threat that required this form of deterrent,and one could envisage the usage of the weapon, then perhaps the position would be tenable. The problem is that many nations, North Korea and Iran to name the current suspected aspirants, previously India and Pakistan, want a slice of the pie. If all you need is a badge saying 'I gotta Nuke' to be heard on the world stage is it any wonder that nations who have felt marginalised historically want to wear the same badge, share the glow of the spotlight of power and dine on the meat with the kings of the world.
I accept this is an argument for unilateral disarmament. I am happy to state I have never been in favour of these weapons, their destructive capability, and doubt how these weapons can be used after the effects which can still be seen on the descendants of the residents of Hiroshima and Nagasaki. But, what makes the position seem more relevant is the fact that the enemies that are faced in the modern world are either impotent, as Iraq was, or unconnected to states. We cannot 'nuke' terrorism, equally we cannot 'nuke' global warming, so why else would any state leader want to waste money on such weapons?
Imagine the scene, the meeting of the United Nations. Prime Minister Tony Blair approaches the banquet hall. Take a seat anywhere the usher suggests, a quick flash of the badge. "Oh Mr Blair, nuclear defence, that will do nicely, this way to the top table sir!"
Posted by Darren G. Lilleker at 11:49 am 1 comment:

New Labour, as a phrase, descriptor, perhaps even ideology, was largely a rhe 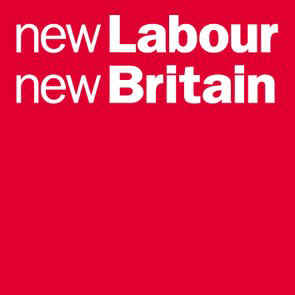 torical device. Its purpose was made clear by Philip Gould in The Unfinished Revolution, the expose of how Labour was modernised into an election winning machine, it was created to delineate the Blair led party from that of his predecessors. It was a re-branding exercise, a marketing gimmick perhaps; fundamentally it was an outward representation of the fact that the party's policies were to be a fusion of the vague Third Way ideas emerging within the global socialist movement and the neo-liberalism established by Thatcher and Reagan during the 1980s. As such therefore New Labour in itself meant very little, only that it created another rhetorical device: 'Old Labour'.

But now we are told that New Labour has had its day, it is moribund, it will crawl up the curtain

and join the choir invisible on the day that Blair leaves No10 for the last time. These are the ideas advocated by Welsh First Minister, Rhodri Morgan, the man Blair never wanted to be in that position and who, like Ken Livingstone, found himself facing all manner of tactics designed to hinder his election. Though reasonably quiet in his dissent it appears he now wishes to comment on Labour's future at this seemingly important juncture.

Interestingly he appears to invoke rhetoric familiar to many from beer adverts; that New Labour "reached parts that other Labour programmes and projects and political leaders have not been able to reach". He also likens it to the Venus di Milo "you have to gawp with admiration at its quality and brilliance, but it is indisputably incomplete and beginning to show more than a few signs of its age"; harsh words indeed. He also calls for a 21st Century socialism, though without offering too much detail on what this means. So what is this all about?

The answer is: nothing! Though deemed newsworthy it appears as nothing more than rhetoric on rhetoric about rhetoric. The purpose of New Labour as a phrase was achieved, it was probably moribund by June 1997. Its symbolic value is more in other rhetoric that has become attached to the phrase: 'best when at our boldest', 'New Britain', those phrases that demonstrate being of the modern and not of the traditional or out-dated or conservative. Therefore as an idea 'newness' remains at large, perhaps the point Morgan should make is that Brown can no longer aspire to this given that after 10 years New Labour is no longer new and neither is he.

But does the rhetorical and symbolic aspects of New Labour remain, I argue that they do. Not in the Labour Party, not in this vague idea of 21st Century socialism that is almost beyond definition; no the symbolism that thrust Blair into office in 1997 is alive and well and being exploited by Cameron's Conservative Party. They may not be calling themselves the 'New Conservatives' but they attempt to invoke that new image coupled with not representing themselves as the party not in power so an alternative to the Labour that people seem to be becoming tired of.

Rhetorically, the symbolic associations of new have long escaped from No10, sl

owly ebbed away by the familiarity that is unavoidable when in government. The clothes of New Labour are being borrowed and adapted to suit a new government in waiting, a new round of rhetoric begins as the Conservatives re-brand themselves in all ways but in name. Hence the fuzzy tree perhaps, though what this says rhetorically or symbolically is more than a little hard to grasp.
Posted by Darren G. Lilleker at 4:47 pm No comments: