Just who is being bullied here?

It has become a fair question, is it Gordon Brown who is being bullied by a hostile media; Christine Pratt of the National Bullying Helpline - just to maintain balance and perhaps due to the whiff of blood the pack now have; the Conservatives who some allege to be behind Pratt sticking her head above the parapet? Its all really a bit bizarre.
At any point anyone in a position of power can be accused of bullying, people management is a skill which some have and some don't. What the atmosphere is really like inside No. 10 Downing Street is not fully discussed. It is either very tranquil and calm and the leader is benign, or everyone appears to be in constant fear that Gordon Brown will explode in a rage - my suspicion is there is a lot of the former and a little of the latter but that certain events get exaggerated to make a good story. Whether some staff have or do feel aggrieved is something that should firstly be handled internally and not used for political capital at the end of the day; there are after all procedures that any organisation would expect its employees and employers to follow.
What has become rather odd is that some fairly vague allegations supplied by Andrew Ranwnsley and published in yesterdays Observer have become a huge story; tales of Brown's temper are old news and I remember Andrew Marr asking who is Gordon Brown about 4-5 years ago in a BBC special - the opening music was 'Monster' by The Automatic. Brown denied one thing, ever hitting anyone. Mandelson denied a little more than that. Then Christine Pratt waded in to tell the world that her helpline has received calls from employees of No. 10.
Whatever the political argument this is a breach of confidence and as much has been said several times. Why she did this is open to question and the finger has pointed at the Conservative party as engineering this as part of a personalised dirty tricks campaign. Not out of the question and sadly a part of politics - McBride et al are part of a long tradition here. The damage to the NBH organisation and perhaps the Conservatives if links are proven could be serious, especially if there is no evidence that Pratt's claims are truthful. It has certainly brought NBH into the spotlight and a posts here and here have been circulated arguing "if you call the National Bullying Helpline for help, because you believe you’re being bullied at work, and you follow their advice, they might tell your employer that you are the bully, call your grievance vexatious, and leave you in a worse position than when you started". Of course the opposition parties are calling for an enquiry while Labour deny all allegations. The whole affair seems a huge mess to be honest and I tend to agree with Mandelson's comments (which I rarely say) he suggests ""I assumed that this was a storm in a teacup manufactured by somebody who wanted to get some good headlines for his book... It now looks like more of a political operation that's under way, directed at the prime minister personally." I would not personally accuse Andrew Rawnsley, but it does seem rather a convenient series of events and the idea of Pratt talking because she felt that the government was in denial is a rather odd line of argument.
Politics is perhaps becoming too personal and this is a symptom of this. Brown as a figure polarises public opinion. Cameron is not exactly more popular but not as unpopular. But neither should be seen as an endorsement. Attacks seem to be more and more personal, particularly against Brown, and from a wide range or sources. Within the hypermedia age anyone can say anything and it become a piece of political/election communication. Perhaps this is Christine Pratt's role, it was a personal move for political reasons, any more would be an accusation and even this is conjecture. But there is a big why question and it relates full circle to where I started with this ramble. Who is being bullied here? Brown is constantly under fire for being himself, one wonders how much sympathy such attacks earn him and reinforce images of the 'nasty' opposition. It may not matter who did what, to whom, or why; it is public perceptions that matter and it may be that these attacks actually help Brown far more than the range of oppositional forces think as they continue these attacks.
Posted by Dr Darren G Lilleker at 3:11 pm 1 comment:

Is it ever appropriate to call your opponent a scum-sucking pig?

I blogged a matter of days ago about people getting into trouble for inappropriate tweets. It was based on observations of Twitter usage. It may be the people I follow, but it has become increasingly partisan and polarised in recent weeks and there has been a lot of attack, rebuttal and counter attack. Sensible, objective voices become marginalised and the medium loses its power as a way of engaging some people in more rational political discourse - noted by Andrew Chadwick on Twitter yesterday - a shame. What is the result, that Twitter scandals become magnified and part of what is now bound to be one of the most negative campaigns with no clear separation between what is party generated and what is independent. 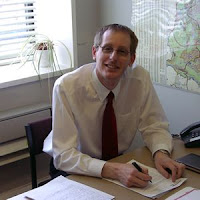 That is a different story, and I wanted to highlight two episodes to explore how Twitter seems to be used during the election campaign. In the UK, one contribution to the 'I've never voted Tory' hashtag was under the name of David Wright MP (Labour obviously) and included the elegant argument "because you can put lipstick on a scum-sucking pig, but it’s still a scum-sucking pig". David (pictured right) claims his feed was hacked, which may well be the case, for all we know it could have been hacked deliberately to cause trouble for him or the Labour party - all things after all are possible. The fact that follow-up tweets which were not later deleted included 'must've hit a nerve" suggests claims of hacking are questionable however. The story then escalated and Eric Pickles waded in to demand an apology, this was published on Iain Dale's blog and also picked up by the media. Did he, didn't he, does it matter, who cares; all interesting questions. What it is though is symptomatic of the political discourse on Twitter, which anyone can be drawn into, but once drawn in it becomes difficult to retract (impossible to edit) a tweet and then you have to find some form of excuse.
Similar rows are bubbling across in the US, in Ohio, where there will be a by-election following

the death of Senator John Murtha. Democrat candidate Jennifer Brunner is using a tweet by COAST and organisation supported by her opponent Rob Portman (left), which read "John Murtha dead at 77. Good riddance bad egg" as an indication of his character. Her campaign, which has much broader and substantial criticisms of Portman, includes the line "Ohioans are decent people, and we "get" what people are about by what they do" - perhaps as relevant to the reference to Murtha, his links to COAST, and his opposition to spending and taxes (the campaign covered by COAST) over which political arguments are raging.
Twitter seems to be increasingly used as a campaign tool. But is it a wise tool? Well any tool is only as wise as the user and that in many ways is the problem with Twitter. We can suggest that the use of short phrases that can be broadcast to a huge audience is very attractive to anyone running a campaign. But are the short phrases well thought out? One may imagine that the 'I've never voted Tory' hashtag is something viewed only by Labour supporters, no these are monitored very widely. Thus the imagined and actual audiences may be very different. It is ok to produce these simple slogans, but do they actually have broader ramifications when they are as negative as those used (maybe) by Wright or Portman? There was a flurry of excitement when it was revealed that the Conservative Central Office wanted to approve all tweets, not such a silly idea. But, while MPs and PPCs may be controllable, the broader party twitterers cannot. This is where the bulk of negativity comes from and, as Andy Chadwick noted, the outcome will be that there will be a small and highly polarised conversation taking place that replicates the yah-boo of the Westminster floor. It will be of little value to anyone and probably will be nothing more than an afterthought to the election. Sad, for a time I thought it may be the great tool of mobilisation; or will this negativity actually mobilise people?
Posted by Dr Darren G Lilleker at 11:00 am 4 comments:

Can you get in trouble for Twittering inappropriate comments?

We know that there have been cases of people being sacked for their Facebook status updates, Twitter seems even more immediate and often is used very unwisely by some. Politicians can tweet from the floor of parliaments, commenting on everything from the rationale behind policy to the tie worn by the speaker (tweets sent during the election of the UK Speaker of the House of Commons evidenced some of this); but are there every repercussions? It may be easy to think you know who is reading your tweets, you have an imagined audience rather than recognising that the world could be listening. Here is a story that Joto Fritz shared with the Democracy Online Forum:
There was a case in the Parliament of Lower Saxony, Germany in December 2009. Helge Limburg, a member for the Greens, used his Twitter account during the debate on the 2010 budget and posted that the speech of the Interior Minister reminded him of HC Strache and Gerd Wilders, two right-wing politicians in Austria and the Netherlands and called him an "unbearable agitator". This was made public during the debate by a member of the FDP (Liberal Party) who read the entry out loud. This led to a heated debate and an excuse [apology of sorts, DL] by Limburg "for the choice of words, not the content". The debate then ended peacefully. So no charging or conviction but heated debate due to statements made on Twitter.
At a forum on the use of social media in Westminster early last year, that well-respected communication expert Derek Draper did comment on the immediacy of Twitter and that he could read comments about himself speaking at events while he was speaking and then use them to steer his speech. You could also use them to attack the opposition also, if they are tweeting. One does wonder when the first case will be brought that questions whether a tweet constitutes libel - surely it must - or slander. Given that it will be one of the election battlegrounds it may be interesting to see if anyone will wish to shout foul when tweeted about or if it will all be just part of the rough and tumble of election campaigning.
Posted by Dr Darren G Lilleker at 9:13 am No comments: