David Cameron’s long awaited and long delayed speech on Europe finally arrived and many have described it as a ‘pivotal’, ‘epoch-defining’ speech. It may or may not be that – we will have to wait a few years to know for sure. But I sense it will be. It appears to have achieved two things immediately. The text of the speech seems to appeal to both the pro-European and anti-European factions within his party by calling for an in-out referendum whilst signalling a strong desire to stay within a ‘reformed European Union’. In fact the message will make the pro-European conservatives very nervous about a ‘gamble’ that the electorate will want to stay in under any circumstances when opinion polls suggest a majority want out. But they are likely to be a lot quieter than the rowdy Euro-sceptics have been in recent months. The Lib Dems are clearly unhappy about Cameron’s speech and you only have to watch Nick Clegg’s face in the House of Commons today to see that. 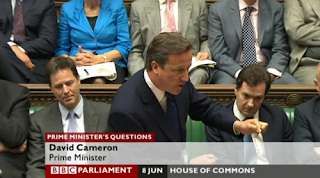 The wild cheering by the bank-bench Tories in Prime Minister’s Questions shows that you underestimate Cameron at your cost. He has, in a matter of hours, re-energised his party, put off the many thorny issues of Europe to a date after the next election, shown Labour and the Lib Dems to be out of touch with the UK voting public and made UKIP look faintly irrelevant. It’s an astonishing move – a high wire balancing act that may come unstuck, but after yesterday's PMQs – it looks as if he has pulled it off.

Ed Miliband put on a brave face and landed a few well aimed digs: ‘He’s been driven to it not by the national interest, but been dragged to it by his party’. However, you sense Cameron’s confidence rising as fires back: ‘We want to reset that relationship. He hasn’t got a clue what he’d do.’ Worst of all, Milband seemed skewered by the simple choice Cameron gave him: ‘The most basic question of all is do you want a referendum? Yes or no? I do, does he?’ To which Miliband replied: ‘My position is no, we don’t want a referendum’.

If George Osborne is competent enough to put a little life (and investment) back in the economy before 2015 the Tories could be riding high on Cameron’s promise of ‘a renegotiation and then a referendum’. While the exact details of that renegotiation are only hinted at it’s clear that Cameron favours a more ‘market-friendly’ Europe. In PMQs he shouted above the yells of approval from his party: ‘We’ve been very clear about what we want to see - change. In a whole series of areas social legislation, employment legislation, environmental legislation where Europe has gone far too far.’ So the negotiation would seek an end to 48 hour maximum working week, an end to talk of a Financial Transaction Tax (something that could reduce speculation and raise much needed revenues), an end to some of the basic environmental protections that have been passed in Brussels. He is also holding out the promise of an end to ‘meddling’ by the European Court of Human Rights. All red meat to conservative Daily Mail reading voters. Not so great for those looking for a more progressive European Union.

There’s a long way to go yet – the German-French axis may upset Cameron’s plans where Labour and the LibDems cannot. Voters may decide that Europe is a distraction from the real issues.There are many ifs and buts and winning the 2015 election (the condition for any changes to existing European treaties) is the biggest ‘if’ of all. But I suspect Clegg knows that the Lib Dem’s are a busted flush now. Cameron has used them to prop up an unpopular round of savage austerity cuts and to triple the cost of university fees (against Clegg’s signed pledge not to increase them). This may seem like yesterday’s news now but wait for the election when voters are reminded constantly of it. The I’m sorry spoof video viewed by over 2 million people will almost certainly be playing on Nick Clegg’s political gravestone in 2015. But it may just be that in an adjoining plot Cameron’s speech on Europe will be playing on another headstone – that of Ed Miliband.

Register for our Post-Leveson Media Reform Conference on 8th February at:
http://www.bournemouth.ac.uk/futurestudents/downloads/registration-media-policy-post.pdf

Posted by ExpatGoneHome at 7:06 am 4 comments:

Cameron's speech: a message to his critics or British or EU leaders? 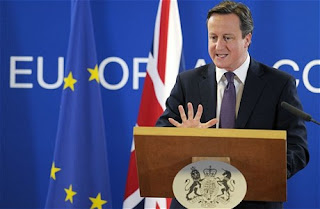 The long awaited and long-trailed speech by David Cameron to map out Britain's future relationship with the European Union has taken place. It can be interpreted in two ways. Firstly as a call for reform of the political settlement that binds EU member states. Secondly as a mechanism for silencing opponents of Britain's membership in his own party and the UK Independence Party who threaten to take votes from the Conservatives at next year's European Parliamentary Election. So what was this all about fundamentally?

Cameron started on the attack but finished defending the European Union, but it is the role of the EU in maintaining our, and its other member's, prosperity that he focused on defending. He argued that EU membership is a means to an end: prosperity. The EU is not a means in itself. He argued that the EU is facing three crises:
But, he argued the greatest danger facing the EU is the rejection of new thinking. More of the same is not tenable. This was not purely about highlighting the deficit in governance, economic competitiveness and accountability. Cameron also presented a vision around five principles:
He made sweeping claims about British people being disillusioned with the EU, wanting a common market not a political union, over which they have had no say; this a direct attack on predecessors who shrank away from a referendum. Cameron wants to confront the issue, but not now.

Cameron argued that what is needed is a new settlement for the EU, and that this may be inevitable when the EU emerges from the Eurozone crisis. He wants to negotiate for a new settlement based on his principles, and in that he is not alone as an EU leader. Following those negotiations and redrafting an image of the future of the Union will be presented to the British people at which point an simple in or out choice will be given in a referendum.

So does it matter. Some European leaders will agree and may well work with Cameron to support his five principles. There is much truth in his critique of the workings of the EU, and many agree that reform may be needed and may now be inevitable. But these are only principles, broad brush statements about the future, there is no detail on how these would be instituted. So could this shape the EU, probably not, it will be down to future negotiations among all the leaders of the EU member states. But, Conservative MPs seem favourable and that maybe the more important aspect of the speech. He promised a referendum, delivered a very conservative and neo-liberal critique of the EU, he called for a return to economic not political union: he wore the clothes of the Eurosceptic throughout. But he seems also to have assuaged calls for a referendum now. His defence of the union, and plausible case for why not now may have won the day. So perhaps the internal and domestic political ramifications are more important than the more global impact.

But there is now uncertainty. Sometime, possibly in the next five years there could be a referendum. Possibly Cameron will push for a yes to staying a member but, if the negotiations fail, he may push for a no. How will that uncertainty impact upon our relations within the EU, the relations for pan-European business partnerships? The wider implications are as uncertain as Cameron's proposals and the future relationship between Britain and the European Union
Posted by Dr Darren G Lilleker at 9:05 am 5 comments: 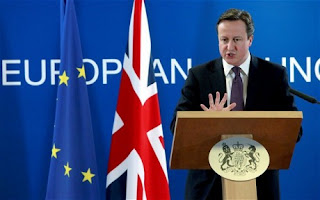 Can Cameron's speech pull the Tories from the Euro swamp?


As David Cameron prepares to make what may be the most important speech of his political career it looks like the Conservative Party are marching back into the fetid political swamp that is Europe all over again. Margaret Thatcher, the Tories greatest twentieth century star (after Winston Churchill) was swallowed by this swamp as was her unlucky successor John Major.

Now it seems David Cameron is being dragged under as Europhiles and Europhobes within his party have allowed their self-destructive impulses to resurface. This is hardly surprising given the dreadful state of the Euro and the European project generally in the post-2007 financial crisis era. Voters are increasingly wary of further involvement in a European Union that is prepared to beggar the people of Greece, Spain, Portugal and Ireland to save the ill-conceived vanity project that is the Euro. The rise and rise of UKIP in recent years  is a clear sign that a large section of the public want as little as possible to do with the continent, its open borders, austerity plans and loss of sovereignty. With UKIP actually ahead of the Tories in one recent ComRes poll  http://ukpollingreport.co.uk/blog/archives/6829 for European elections old divisions within the Conservative Party have widened dramatically as members worry that UKIP will do to the party what the SDP did to Labour in the 1980s.

The prospect of splitting the Tory vote has actually increased splits within the party as those for and against Europe begin a fight to the death. In the meantime Labour and UKIP are quietly chuckling on the sidelines as Cameron tries to navigate a middle way between the warring factions in his party that will keep both sides happy. Whatever the speech contains it is most likely to spell the beginning of the end for the increasingly fragile ConDem alliance.