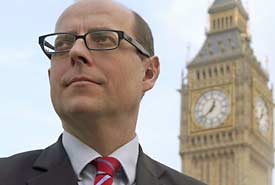 Nick Robinson, BBC's News political editor has had a blog for some time now, it is really an extension of his reports to camera on the ongoing Westminster sagas that he brings into the homes of millions on a nightly basis; but is it also a place for Nick to offer his own perspective on events?

The style is instantly recognisable, often with journalists you can umagine them saying it as you are reading. So is the general framing of news. Important news is Blair's slip of the tongue, adding the 'it has' to the statement that the situation in Iraq since the toppling of Saddam has been pretty much a disaster. In fact the use of words and phrases, or their absense from conversations between Blair and Musharraf, is standard fare for both the blog and Nick's reports to camera. Is there something missing?

The problem with the Newslog is that it is stuck within the confines of the BBC news format. Yes the sideswipes at politicians recur, the reports fit in to the narratives of the Blair/Brown conflict, or Blair's protracted demise, but we do not get anything of the experiences of Nick Robinson.

This man is followign Blair around the world, he is party to so much that he cannot report, but that would be the interesting stuff wouldn't it? Sadly we have to wait for his memoirs in years to come to find out the gory details from behind the scenes. But this leaves us with a question, why read the Newslog at all, why not watch the pictures accompanying these comments at 6pm or 10.30? There is an answer, sure you can scream at the TV, but you can actually publish a comment to a blog.

And here we find the interesting stuff. Replication of the negative attitude towards politicians by many, or Mr Siddelley's criticism of the disdain demonstrated by Nick through his semi-sarcastic tone. Here we find out what the public think, or do we? Perhaps this is worthy of some study, or perhaps it is simply a conversation between a few people that anyone can access but do not. Whatever the case this attempt at interaction is at times vibrant, though one gets the sense that Nick Robinson is actually talking past many of the contributors; rather than responding the next report goes up. So why is this any different to screaming at the TV?
Posted by Darren G. Lilleker at 3:33 pm No comments:

How to bury bad news

George W Bush had a really bad day, in fact he admitted himself that he and the Republican Party had received a 'thumping' from US voters. But in his own unique way he brushed this aside. The smile, the impression of innocence remained, though the swagger was described by one journalist as not that of the heroic cowboy who had tamed the wild steed.

But the sense of defeat, and accompanying narratives that should have pervaded the media were cut short. There was more important news on the way. The media's agenda of the weeks preceding the UD mid-terms was going to be fed the ultimate feast: Rumsfeld was to be sacrificed. This has been called for by the pentagon, the armed forces and the voters for months; with the campaign becoming more vociferous as the election neared, so why as the results were being counted did Bush decide a 'new direction' was needed in Iraq? Did he experience a eureka moment, realise that others knew better, or was there a more cunning reason for this announcement?

Anyone who has heard of Karl Rove, and his role as advisor / spin-doctor / media manager extraordinaire behind the Bush presidency should not be surprised by Bush's announcement. While Bush being forced to sack Rumsfeld could be seen as a climb down this is not how it was painted. Perhaps if Rumsfeld had been sacrificed in an attempt to save the election result the coverage would have been worse; but this joint decision is not viewed as a U-turn.

What Bush appears to have achieved is to deflect the coverage from his 'thumping' to the resignation of his Defence Chief - Karl Rove strikes again! Hence we can read this as a fantastic example of managing the news, burying bad news with the story the media wanted; and it seems to have worked. In fact the consensus appears to be that this is the right decision by Bush, could he regain his credibility? Is this the first step? With Rove's guidance who knows how history will remember the man they call Dubya.
Posted by Darren G. Lilleker at 12:12 pm No comments: